Unto the Heralds and Populace of Lochac, greetings.

I hope everyone had a restful Festive Season. The season being one reason for the delay in this CAMEL. The other is that I wanted to wait until after 12th Night so that I could follow up an announcement. 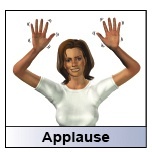 At Rowany Festival, I announced that I would be establishing a deputy role for Silent Heralding. Recently I called for applicants for the position. At 12th Night, I announced the person who will be taking on the role: Lady Jadwiga ze Katowice from Politarchopolis. Mundanely Lady Jadwiga is training to be a sign language interpreter, and I look forward to seeing her use that training to help develop the processes by which the Kingdom provides greater inclusion at events. When I made the announcement, I taught those in attendance (who didn’t know) how the applaud in sign language. It was heartwarming to see some people (including landed Barons and Baronesses) continuing to sign applause during the ‘huzzahs’ even after Court had moved on to other business. From these small steps, change can come.

Here are the registrations from the October LoAR, where there were three “Nice!” out of eight names … well done Lochac!:

Eleanor d’Arcy. Device. Per pale wavy gules and azure, on a plate a dragon dormant sable.

Elena Sophia di Luciano dei Medici. Name and device. Per fess enarched Or and sable, three torteaux and a serpent nowed in a quatrefoil knot vorant of its own tail Or.

Gaius Quintilius Antoninus. Name and device. Gules, on a double-headed eagle between three roundels Or, a skull sable.

Salbi{o,}rg vís. Name and device. Gules, an owl contourny argent maintaining in its feet a key fesswise Or.

Titus Quintilius Calidus. Badge. Purpure, a pale Or between two demi-roundels flats to center argent, on a bordure Or an orle purpure.

Rocket Herald has (or will) sent out individual missives to all those with acceptances and returns. Quarrel Herald has updated the Lochac Roll of Arms. Huzzah for these new registrations!

In service to the Crown and Kingdom of Lochac, always.